Sharpdome represents the latest development in PTZ camera technology, with benefits for public locations, such as shopping malls, roads or sports arenas, city surveillance and many more applications.

Sharpdome is an innovative technology that solves problems that occur in a conventional dome. In Sharpdome, the sphere has been tilted 39º, optimizing image quality. There are several advantages to tilting the dome. The tilt makes it possible to place the camera at the center point of the sphere, which gives the ideal L-value of 0. Since the transparent covering acts as a lens, the camera lens should always be placed at an even distance to the transparent covering at all tilt angles, to avoid distortion and double images. With the tilted dome, the entire field of view of the camera is spherical and the camera is always at the same distance to the transparent covering, which makes it optically optimal, minimizing errors of refraction and double images.

This figure shows a tilted Sharpdome and a conventional, level dome. Sharpdome offers innovative mechanics that makes the dome rotate.

Due to the manufacturing process, a conventional camera dome is not a perfect sphere but consists of one curved part, in the form of a semi-sphere, and one straight part. Because of this, the image produced by the camera inside the dome will be distorted. Also, when the camera is tilted, the distance between the camera lens and the transparent covering varies, which gives rise to reflections. With Sharpdome, these problems are now part of the past. 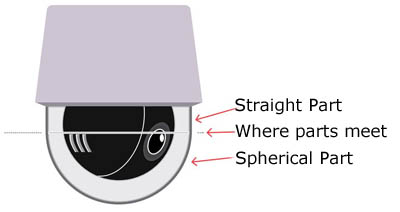 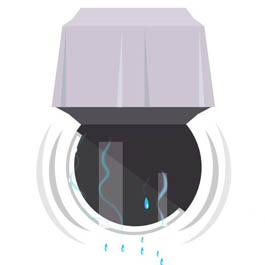 In a conventional dome, the camera must be placed at a certain distance from the transparent covering, to avoid the camera from interfering with the covering when tilting. The increased distance gives rise to more reflections, disturbing the image quality of the camera. Because of the ideal L-value in Sharpdome, the camera can be placed closer to the transparent covering, giving the same, high quality resolution on all levels. The image quality will be clear and sharp in all directions, even above the horizon.

What is Axis Speed Dry function?

The Sharpdome technology includes the unique Axis Speed Dry function that will help to provide sharp images in rainy weather. It can also simplify dome cleaning, allowing for more efficient methods such as high pressure cleaning. The Axis Speed Dry function rotates the dome in alternating directions at high speed. This will break the surface tension of the water and make the drips come off the dome glass.